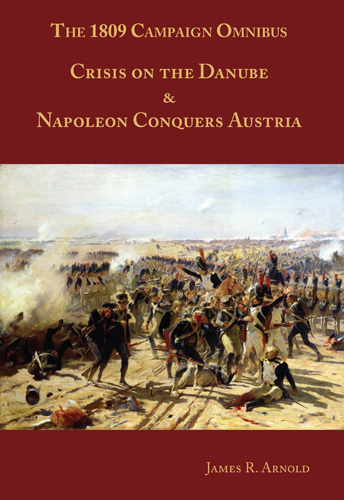 For the first time together in one volume, Arnold’s two books devoted to Napoleon’s 1809 campaign

Crisis on the Danube: Napoleon’s Austrian Campaign of 1809

“By any standards this is a thrilling period of military history, and the author does it full justice.” David G. Chandler, author of The Campaigns of Napoleon

Crisis on the Danube begins with the swirl of diplomatic intrigue that preceded the 1809 Austrian campaign. Revealed is the complex web of alliances, Napoleon’s mistaken political calculations, and the duplicity of his underlings that draw the French emperor into an unwanted war. Despite his diplomatic naïveté, Napoleon continued to exhibit flashes of military genius that prompted him to describe this campaign as among the finest in his career. A detailed account of the makeup and tactical objectives of the Napoleonic war machine is followed by an explanation of the rival army’s organization and qualities. Crisis on the Danube describes the major engagements in this first phase of the 1809 war, from the Austrian invasion of Bavaria to the French capture of Ratisbonne. Dramatic first-hand accounts vividly narrate the consequences of these decisions, revealing what it was like to be under fire on a Napoleonic battlefield.

“Combining fascinating character studies with a fast-paced narrative, the author has produced a first rate study of the 1809 Austrian campaign.” Daily News

The sun rose on April 24, 1809 to illuminate a continent at war. From Poland to Spain some 600,000 soldiers awakened to duty. Follow Napoleon’s progress form the bloody combat at Ebelsberg to the occupation of Vienna. Then comes the struggle to cross the mighty Danube, a botched effort that yields the emperor’s first clear defeat at the battle of Aspern–Essling. The French army sat at the end of a long and imperiled line of communications while central Europe erupted in revolt. At this moment of supreme crisis, Napoleon displayed his formidable talents and prepared a masterful counterstroke. The ensuing Battle of Wagram featured a heretofore unprecedented concentration of strength and firepower. Both sides suffered staggering losses but Napoleon’s commanding presence produced victory. For one final time the conqueror redrew the map of Europe.