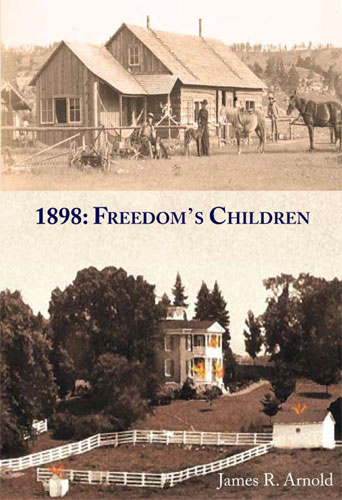 1898: Freedom’s Children is both a stand-alone novel and the sequel to Arnold’s Civil War novel, The Cost of Freedom. The Civil War’s violence unites Amanda and Armistead, who had once taken opposite sides. They leave their beloved Virginia to begin a new life together on a hardscrabble Texas ranch. Here they raise two children, whose divergent lives become this book’s central theme.

Morgan Carter goes to New York City to seek employment. She works for Joseph Pulitzer’s New York World as that paper competes to become the voice for a new, mass audience composed of recently arrived immigrants. Confronting the era’s blatant sexism, Morgan struggles to escape the journalistic confines of the Lady’s Page. She begins to make a name for herself because of her ability to see and describe the city as it is, whether the world of the rich or the lives of the immigrants packed into their East Side tenements. When war breaks out in 1898, she finds her voice and becomes closely connected to the Anti-Imperialist League. In this capacity, Morgan mingles with the League’s leaders who include Robber Barons, famous authors, and celebrated social activists. Having learned from her parents the terrible costs of war, Morgan becomes an ardent opponent of the American war in the Philippines. Her work leads to a chance encounter with the man who will become her husband.

Morgan’s younger brother, Randolph Carter, absorbs very different lessons from his youthful experiences. Rand is among “The Boys of ’98”, namely, young men who volunteer for the military when the Spanish American War begins. He joins the army and is sent to the Philippines. Rand enters an exotic, foreign land where the U.S. Army is fighting a brutal battle against Filipino insurgents. The insurgents are patriots trying to liberate their country from colonial rule. Their leaders recognize that their best chance for victory is through the efforts of the Anti-Imperialist League. Rand and his comrades are American patriots trying to emulate the military service displayed by their parents’ generation during the Civil War. They are all too aware that the work of the Anti-Imperialist League undermines their efforts while putting their own lives at increased risk.

History records that in 1898, American leaders thrust the nation into a new role filled with ethical challenges. Like their country, Morgan and Rand must navigate their way in a world with few obvious signposts. Choices are seldom black or white, but are instead a blur of old traditions and new realizations.

Two strong threads connect Morgan’s and Rand’s stories: the bonds of family; and the legacy of Abner Means, the secret service puppet-master whose reach continues to extend into the highest levels of American government.

1898 is a story about two independent siblings who find themselves on opposite sides in an environment that is experiencing rapid, disorienting change; change so drastic that it threatens to unmoor the old truths of love and loyalty to family and country.