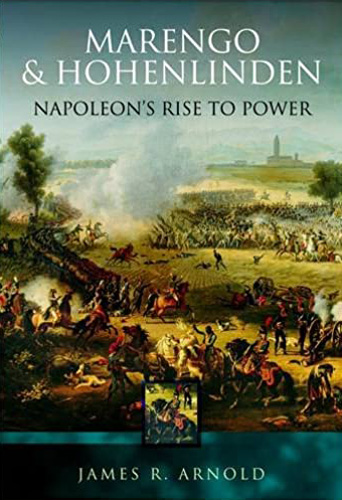 This title is no longer available through this website, but can still be purchased here at Amazon.com.

“My house began on the field of Marengo.”

So spoke Napoleon Bonaparte when reflecting upon his victory over the Austrians in 1800. He recalled a desperate afternoon when his future hung in the balance. Marengo and Hohenlinden: Napoleon’s Rise to Power relates the momentous events that began in the late autumn of 1799. Within a thirty-three day span starting with his return from Egypt, Bonaparte escaped punishment for deserting his army and ascended to ruler of the nation. Yet his position was precarious. At home, political and military rivals abounded. On France’s frontier, the forces of the Second Coalition prepared an offensive to crush the Corsican upstart. Bonaparte knew that France would accept his rule only if he gained military victories that brought peace.

These events provide the story line, beginning with Bonaparte’s rise to power via the coup of Brumaire. Applying his organizational genius to the challenge of overthrowing the government, Bonaparte brilliantly plots a coup. At the last minute his political naivete almost derails him. Only intervention from a most unlikely source saves him.

To consolidate Brumaire, First Consul Bonaparte needs a military victory. To redeem his pledge to France, he needs a favorable peace. To obtain these objectives he must enlist support from his greatest rival, General Jean Moreau. Moreau is a popular, gifted soldier and one who seldom cooperates with anyone. Moreover, he holds deep suspicions about Bonaparte’s motives. Their relationship and their actions dominate events during the decisive year of 1800. We follow Bonaparte’s army over the Alps to its fateful collision with the Austrian army at Marengo. Then we turn to Moreau’s campaign culminating in the epic Battle of Hohenlinden. The twin campaigns prove decisive, since the Battles of Marengo and Hohenlinden secure Bonaparte’s rule. In turn, the failure of the Second Coalition condemns Europe to a fifteen-year struggle to overthrow him. 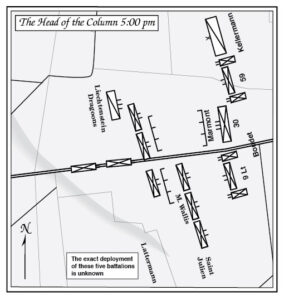 Marengo and Hohenlinden is an account of European military and political events from 1799 to 1801, spanning Napoleon Bonaparte’s coup of Brumaire to his assumption of dictatorship. Twenty maps, artwork, battlefield photos, and detailed orders of battle are included in this quality book, printed to last a lifetime and more by using heavy, acid-free paper, strong binding, and a stiff cover.

Excerpt: Afternoon on the Field at Marengo

The afternoon sun seemed to linger. Its position told Napoleon Bonaparte that there was no chance that darkness would come to save his army. Seventeen thousand Frenchmen were retreating before an ascendant Austrian army. Unless something dramatic occurred, this battle was lost.

The young leader’s position as First Consul rested precariously upon a coalition of diverse interests. Win this battle and his support would solidify. Lose, and his many enemies in Paris might surface to rally around some other popular general whom they would anoint as titular leader of state. Protected by that general’s sword — perhaps Bernadotte’s, more likely Moreau’s — they would methodically purge his supporters and eventually annihilate the Bonaparte clan.

That matters had reduced to such a state was his own fault. His overconfidence had blinded him to the possibility that the Austrians might attack. When they had stormed out of their bridgehead this morning, his army had been badly dispersed, its front line units surprised. Yet his lieutenants — old comrade Victor, gallant Lannes — had conducted a brilliant tactical battle until overwhelmed by numbers. Thirty minutes earlier Bonaparte had committed his own elite Consular Guard to help cover their retreat. The Guard performed prodigies, until it too fell back before superior numbers.

Everything depended upon Desaix, who commanded the army’s only available reinforcements. Six hours earlier, Bonaparte had sent a message recalling him. It read, “Come, in the name of god, if you still can.” At that time the Army of Reserve was still holding its position. Now the situation was far worse. Along the main road from Marengo came the battered remnants of Lannes’ and Victor’s corps. The knots of men who still marched beneath their smoke-blackened standards were those stalwarts whom the officers had managed to hold to their duty. A glance to either side of the road revealed that many others had thrown away their weapons to flee as fast as possible. 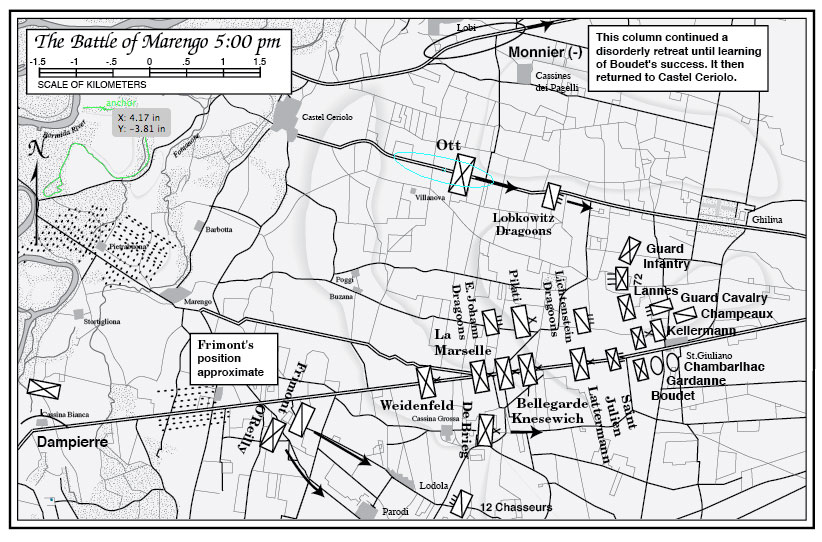 A mud-splattered officer approached at the gallop. It was Desaix. “Well, what do you think of it?” Bonaparte asked.

Desaix pulled out his timepiece. “This battle is completely lost, but…there is time to win another.”

Heartened by his comrade’s response, Bonaparte rode among his troops to rally them for one more desperate effort. He called out, “Soldiers, you have retreated far enough; you know that it is my habit to bivouac on the field of battle.””

“Chins up!” replied a sergeant of the Consular Guard.