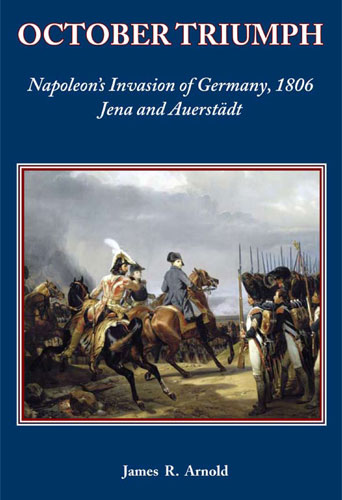 On September 29, 1806, Napoleon wrote to Marshal Soult: “War has not yet been declared; but things hang by a thread.” Although he did not want to fight Prussia, he informed Soult that if war came, his corps would be the first to invade enemy territory. It was a mark of esteem based upon its stellar performance the previous year at Austerlitz. Napoleon did not yet know that Prussia had opted for war.

Although Frederick the Great had been dead for twenty years, Prussia’s reputation still rested on the prestige conferred by his fame. Surrounded by powerful foes, Frederick’s strategic solution had been uncomplicated: “The Prussian army always attacks” And so it was in 1806, with the Prussian high command choosing a forward deployment to bring the enemy to battle as quickly as possible.

Whereas Frederick (and Napoleon) enjoyed absolute unity of command, the 1806 Prussian army did not. Its senior leaders were old, hidebound, and jealous of their authority. At the top stood the 71-year-old Duke of Brunswick. Decades earlier he had exhibited personal courage and command quality. Inactive after 1794, Brunswick missed out on all of the significant French military innovations of the past twelve years. Normally, a chief of staff might have been able to inform the old man. In the future, the position of Prussian chief of staff would be associated with forming high-level strategy and guiding operational decision-making. But that time was not yet. In 1806, the three chiefs of staff did not even try to cooperate. How the high command was going to make the rapid decisions necessary when confronting a foe like Napoleon was an open question.

In the event, the Jena Campaign proved to be far from a cakewalk for Napoleon and his veteran army. Most Prussian and Saxon units fought bravely. Their tenacity called forth supreme efforts from the French. The metaphorical fog of war confused both sides, leading to miscalculation and blunder. The real Saale River fog that shrouded the battlefields on October 14 created huge tactical challenges. Napoleon retired for the night convinced he had defeated the main Prussian army. But the fog of war had confused even this Great Captain. Napoleon had gained a notable victory, but more important was what transpired at Auerstädt, where Marshal Davout and his “Tenth Legion” won the day’s decisive engagement. Thus was the stage set for controversy as participants, most notably Napoleon himself, massaged the facts to create narratives that bestowed upon themselves honor, glory, and power.

October Triumph: Napoleon’s Invasion of Germany, 1806 relies on primary sources to give voice to the French, Saxon, and Prussian participants. Alongside Crisis in the Snows and Napoleon’s Triumph, it completes the 1806–1807 campaign trilogy. Well illustrated with recent battlefield photographs, 35 maps, paintings, and drawings, it offers a fresh interpretation of one of Napoleon’s foundational victories.