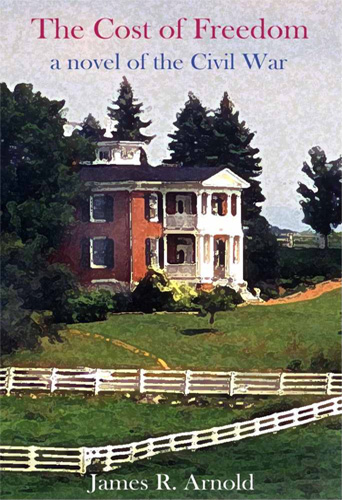 When the Secret Committee’s agent, Abner Means, arrives in Harpers Ferry to meet with John Brown and his band of raiders, no one suspects that the United States is about to be thrust into civil war. The Cost of Freedom follows the fortunes of three young people — twenty-two-year-old Amanda Holland and her cousins, Armistead and Arminius “Min” Carter — who together with others, both ordinary and powerful, are participants in and witnesses to the early years of the Civil War.

The action ranges from Amanda’s Holland Hall plantation to a prosperous nearby Quaker farm, home of the seductive Rachel and her pacifist father, to the field of Manassas where the forces of secession and union collide in battle. Amidst a slowly maturing love, Amanda and Armistead confront conflicting loyalties to family, state, and country as war rends the social fabric that binds their close-knit family. The powerful portrayal of black people — enslaved and free — places slavery in its proper context while revealing the strength of black aspirations. Through it all lurks the shadowy figure of Abner Means, a free-lance intelligence agent and ruthless Abolitionist. In this well-researched work of historical fiction, author James R. Arnold has chosen northern Virginia, the fault line of national divide, to illustrate how individuals, buffeted by events greater than themselves, answered the most basic questions of principles and loyalty as the cost of freedom becomes apparent. It is a page-turning adventure story and a penetrating depiction of character challenged by stark circumstance.

Available here as a quality paperback, or as an e-book from Amazon.